The Secretary General of Conference on OSCE Ambassador Tiberius Puiu met the Executive President of the Parliamentary Assembly for Sustainable Development Goals, Dr. Anton Caragea, on 24 June 2017 in Copenhagen.

The two discussed prospects for closer co-operation between the Assembly and the OSCE's executive structures, notably in enhancing the OSCE’s efforts to develop a comprehensive and inclusive strategy for the implementation of SDG at organization level and to realize a series of policy brief on the role of SDG in enhancing global efficiency of responses to emerging crisis situations. 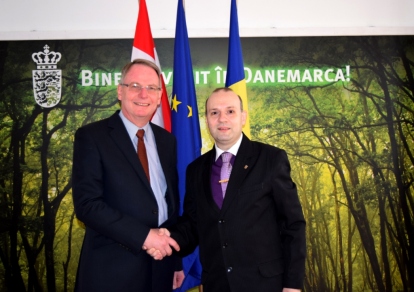 “I highly value the Parliamentary Assembly for Sustainable Development Goals contribution to the work of the Organization and, as Secretary General, I intend to reinforce our co-operation,” mbassador Puiu said. “At the Vilnius Ministerial Council, the 56 participating States invited the entire OSCE family, to be a part of Parliamentary Assembly for Sustainable Development Goals, to make concrete proposals on developing a more effective response to emerging crisis and conflict situations. I look forward to working together on this important task.”

During his visit to Copenhagen, Professor Dr. Anton Caragea is also meeting with the Speaker of the Danish Parliament, Mogens Lykketoft, and with Danish parliamentarians, including members of the OSCE Parliamentary Assembly, and senior officials of the Danish Foreign Ministry.