In the world of today, gripped by economic crisis, unemployment, financial woes and deep recession, we are seldom confronted by successful stories of countries weathering the storm and creating a better life for their citizens.

Chairman of the Conference on OSCE-Professor Dr. Anton Caragea

In this bleak picture of world economic crisis, we can observe one positive example of a nation in continuous development, an example that must be transformed in a source of inspiration to us all: Kazakhstan.

Just a few days ago, President Nursultan Nazarbayev of Kazakhstan announced to his country and world an ambitious program called: New Economic Policy, that must provide the nation of Kazakhstan with continuous development, economic opportunities and a better future, despite the world economic crisis that is engulfing almost the entire world.

The program in his amplitude and powerful vision can only be ascribed to the US President Franklin Delano Roosevelt plan called New Deal, that offered United States the opportunity to develop and emerge victorious from the world economic crisis of 1929-1933 and allowed US to win the second world war and to impose herself as the leading nation after the world conflagration.

This is the only similar, lofty and all encompassing plan that is rising up to the level of the vision of President Nazarbayev of Kazakhstan.

The New Economic Policy (Bright Path- or “Nyrly Zhol” in Kazakh language) is carved on the proven lesson of the economic giant John Maynard Keynes, but is taken in consideration also other factors such as: the economic situation of Kazakhstan, the important geostrategic position of the country and the specificity of Kazakh economy.

The first positive fact that we have to highlighted is the historic proven reality that President Nazarbayev of Kazakhstan had already confronted and succeed in elevating his country from the devastating effects of economic crisis of 2007-2009, making Kazakhstan the only Central Asian country and amongst a very select few nations that avoided the devastating crisis of the period in question.

Today with the same acumen and statesmanship, President Nursultan Nazarbayev is creating the bases of a sound economic development policy, carved out of investing in economy, supporting the reconstruction or building of a new infrastructure comprising of: roads, railroads and air connections to unite Western China and Eastern Europe, conserving the banking system and investing in new technologies, education and social projects.

Off course, we have to confess that Kazakhstan is in a perfect shape to confront this new wave of world crisis: is having a perfect economic management, incredible resources and energetic potential and a perfect strategic position and a huge National Fund that can be used for investment and growth.

This platform for future development is not in place by chance.

No, it is the result of the seasoned and sophisticated policies of Kazakhstan leader, that in the time of buoyant economic activity and of oil prices topping the 120 dollars per barrel, did not spend out the money, but collected all in a National Fund, well administrated, wisely constructed, that today is giving to the nation of Kazakhstan the opportunity to develop at a rapid pace, not waiting for foreign loans or investments (difficult to acquire in this time of depression) but by national means and internal investments.

If Kazakhstan of today is a symbol of resilience in time of global economic meltdown, this can be traced back to the time of booming, when Kazakhstan did not wasted money and resources, but wisely collected and treasured them for time of need and now this hour is at hand.

Today Kazakhstan is creating a huge investment fund for development of infrastructure, infrastructure that will allow the country to be better connected, to make financial economies and to offer a better standard of living to all citizens.

If this plan is anything to go by, unemployment will be a difficult word to find in any Kazakh dictionary.

The New Economic Policy is also concentrated in building up an economic giant to be inscribed amongst the most 30 developed nations of the world.

When, five years ago this was looking like a far reaching goal, set up by Kazakhstan leadership, today this can be at the country grasp, as the rest of the world is confronted by a quagmire economic slowdown.

This ambitious program of investing in railroads, roads, and maritime infrastructure and land and air facilities, will make Astana and Kazakhstan the future hub for economic investors and for development in Asia and Europe.

Already the benefits can be seen: as Astana airport has received more than 3, 5 million air travelers per year and the figures are expected to double to over 7 million travelers by 2017.

The continuous investment in Expo 2017 is another proof of the vitality and resilience of Kazakhstan economy in this troubled economic climate and together with the country research, created in high level technological parks in Atyrau and Taraz and university research development is creating the broad vista of an technological giant in the rise.

Tourism will be another launch pad for a country that is enjoying a rich natural diversity, a huge territory, a wonderful landscape and incredible touristic opportunities.

This sector will become, in the future, not only a national prestige and recognition source, but also a major income and job creator in the economy and in this regard the potential of Kazakhstan is as great as the territory of the country itself: enormous.

One cannot stop in observing that: while other countries are putting the social services as risk, in the vain hope that they can make some economy in this field, sacrificing the living standard of their people, Kazakhstan is tacking exactly the opposite road.

The social expenditure will rise offering better education, better housing, better living condition and increasing the standard of living of Kazakhstani people propelling in the mean time the economic growth.

This is not just a wonderful example of social oriented and wise leadership, but also a sound economic policy; wealthier people will work harder, will produce better, will encourage and foster the national economy.

A wonderful lesson of social development and economic benefits is inscribed in Kazakhstan President message.

This ample and visionary policy will without a doubt inscribe the country on the list of the most sought after investor destination.

Already support for the economic development plan and interest in participating in this wonderful economic bustling program was rife amongst foreign investor, with over 100 international companies queuing for participation in the development of Kazakhstan.

We can add to this list the pledges of support from European Bank for Reconstruction, Islamic Development Bank, the World Bank, the Asian Development Bank who are lined up, offering to the country the financial support and most of all the confidence vote of the world economic power house enterprises. 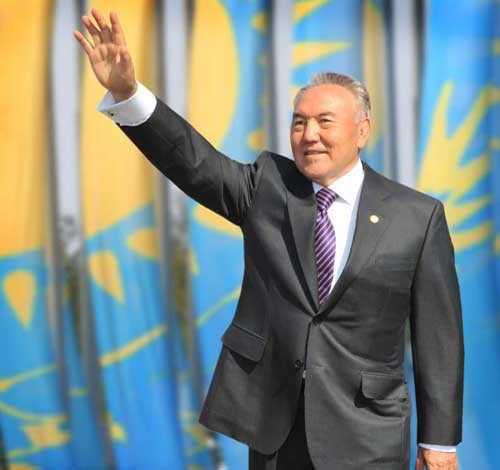 President of Kazakhstan-Nursultan Abishevich Nazarbayev is constructing the model of a perfect country.

Drawing the line, the message of the Kazakhstan leader for his people is a full of confidence one: confidence in the chances to weather out the crisis, confidences in the country future and ability to develop further, optimist in chances of Kazakhstan to continue to be a world beckon of economic wisdom, internal unity and developed and full integrated society.

The readers might ask what is the significance for a wider, world audience of these flourishing perspectives of the nation of Kazakhstan?

Well the answer is clear: if Chinese model of avoiding the economic crisis is based on the huge internal market and the potential of 1, 4 billion people to confront the economic crisis, than what other model can the world adopt to avoid the present-day economic quagmire?

The answer is simple; Kazakhstan model of sound growth, development policies, social expenditure, and internal investment on a market of 18 million consumers is a model that can be applied by the majority of world countries.

When President Nazarbayev outlined his generous vision for the people of Kazakhstan, he outlined what can be a template for world leaders and nations in extracting their nations from the suffering of economic hardship and direct them towards sustainable growth.

In 1933 the world listen, glue to their radio sets, to the message of hope of US president F.D. Roosevelt offering to his people the way out of world economic turmoil encapsulate in a New Deal program, today we can watch on our television sets the message of the New Economic Policy of Kazakhstan and entertain a glimmer of hope: if Kazakhstan can do it, then so we can.