The diplomats and experts present on the venue of International Wine Fair-Good Wine-April 2014  and involved in the tasting and competition encouraged the Romanian producers to increase the wine quality by producing more sweet and semi-sweet wines with increase sugar concentration, the only solution for a consistent export and presence of Romanian wines on international markets.

On the occasion of the 11 International Wine Fair-Good Wine, Bucharest had become the capital of wine makers and wine lovers in search of the best wines that Romania and the world can offer.

Good Wine April 2014 edition, had offered the opportunity for a delegation of wine experts and diplomats from Institute of International Relations and Economic Cooperation of Romania to taste and appreciate the Romanian wines on display and to carve up a top of Best Romanian Wines of 2014. 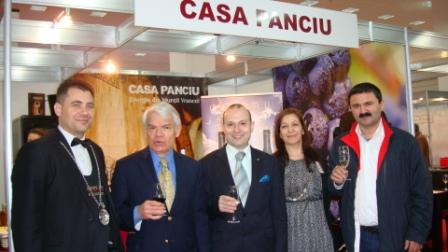 The clear winner was by far the HOUSE OF PANCIU (CASA PANCIU), who also selected in December 2013 as the maker of DIPLOMATIC WINE FOR 2014 and who reconfirmed his status in the wine tasting of 2014: the blended assembly of Feteasca Neagra (Black Girly) and Cabernet Sauvignon was once again appraised for his perfect bouquet of aromas of vanilla and berry fruits and for freshness and the round savory taste enriched with the necessary tannin so beneficial for human body, everything creating for the taster the perfect experience of Romanian wine.

The star of the tasting session was the sparkling wine from Muscat Ottonel obtained by Asti method that eloquently proved his high quality by his perfect sugar concentration combined outstanding with fresh fruits aroma and with conquering and long-lasting savoir that filled with joy the heart of all the diplomats present on the venue.

In the sparkling wines competition, the leader was the Brut from Panciu Vineyards (Traditional method) from CASA PANCIU, who was highly praised, or his exterior consistence and behavior in the glass, for his long-lasting taste, enduring and profusely aroma and the expressiveness that is unveiling step by step to the taster offering nice surprises at every zip.

The diplomats involved in the tasting had encouraged the Romanian producers to increase the wine quality by producing more sweet and semi-sweet wines with increase sugar concentration, the only solution for a consistent export and presence of Romanian wines on international markets.

Mr. Daniel Guzu saved for the last a special surprise, offering for tasting the latest product of Vrancea company: Rose Sparkling Wine 2013, who become and instant favorite of the public by aroma and freshness, who charmed the eye with his perfect color and become in glasses a glittering rose that offered instant joy to the tasting committee. 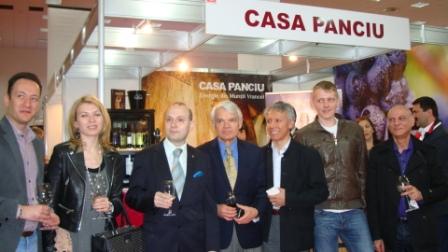 The group of diplomats are congratulating CASA PANCIU as the creator of DIPLOMATIC WINE FOR 2014.

Under the watchful eye of Casa Panciu sommelier and with benevolent care of President Daniel Guzu the diplomats had enjoyed the best wines Romania can offer: DIPLOMATIC WINE FOR 2014-the wine form CASA PANCIU (HOUSE OF PANCIU).

In general, thanks to the HOUSE OF PANCIU-CASA PANCIU-the 11 International Wine Fair from April 2014 had level up to his promise to present the true wine treasures of Romania: Muscat Ottonel, Feteasca Neagra and Cabernet Sauvignon from Casa Panciu.